A set of placemats woven with two contrasting colors of Duet Cotton/Linen. This casually elegant motif is woven by alternating warp and weft colors in a specific order to create the illusion of an intricate pattern, also known as color-and-weave. Order a kit.

I made 2 sets of the Running Stitch placemats on my RHL with the recommended Duet yarn. For the first set, I used Storm (primary color) and Anchor (accent color) and followed the pattern exactly except I only wove 7 horizontal and 7 vertical stripes. For the second set, I used Dune as the primary color and Pearl as the accent. I also doubled the warp ends between the stripes, which resulted in a sturdier placemat (note: there was enough yarn on the primary cone to double the warp ends).

It might not be obvious from the photo but there are subtle color variations in the Duet yarn, which means that the woven pieces have a surprising depth of color that I haven't been able to achieve on a RHL with yarns that I've purchased from other yarn stores. The finished placemats are beautiful!

And GIST Customer Service is fantastic! I had a couple questions early on and Christine was so responsive and helpful! As a relatively new RHL weaver, I so appreciated her advice. 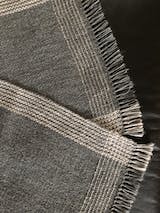