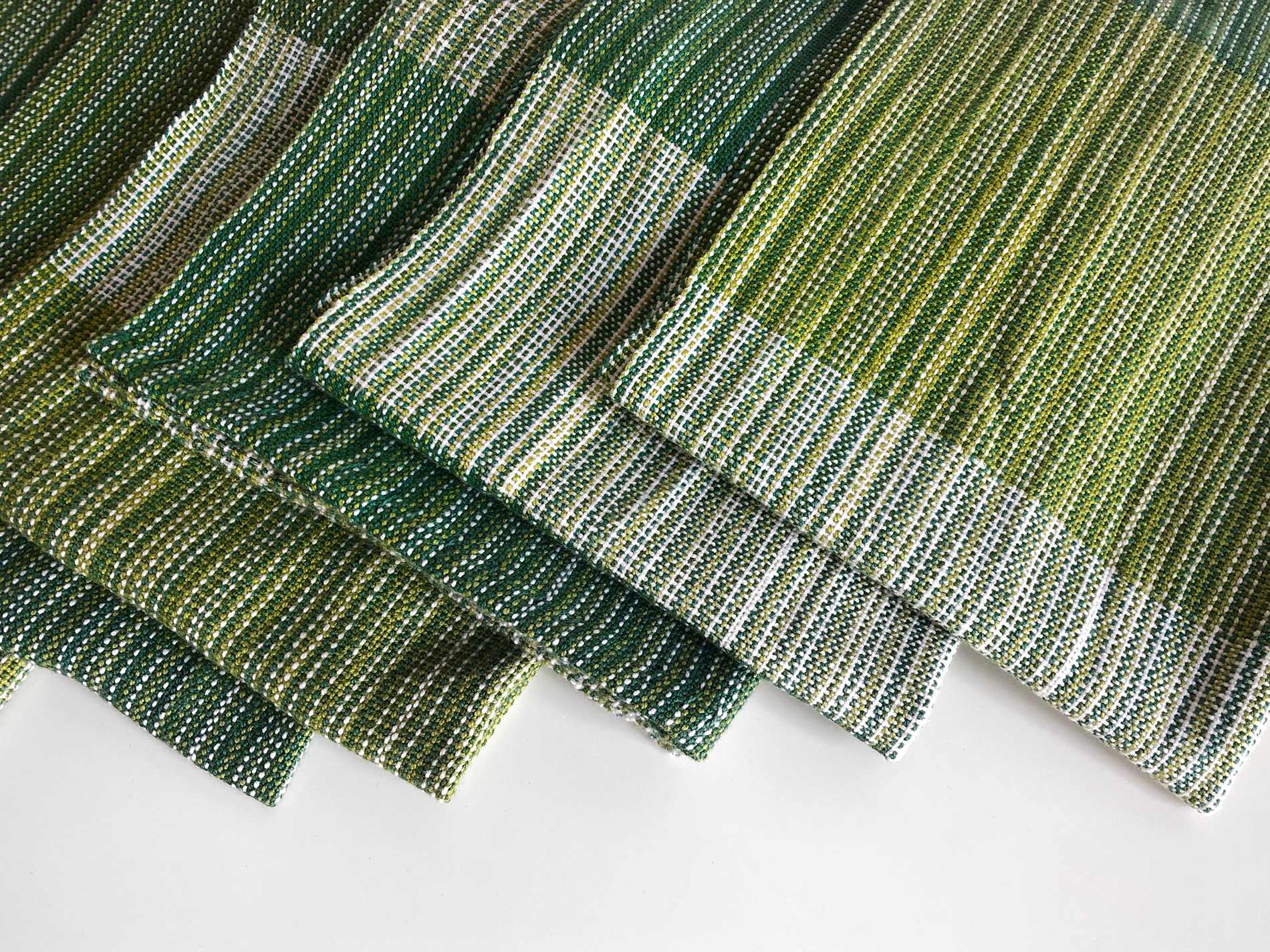 This vibrant pinstripe pattern uses four colors of our 8/2 Un-Mercerized Cotton Weaving Yarn. Weave a set of six towels and experiment with color mixing in the warp and weft for a design that is truly one-of-a-kind.

Want to weave a similar project on your rigid heddle loom? Check out our Pinstripe Napkins pattern. 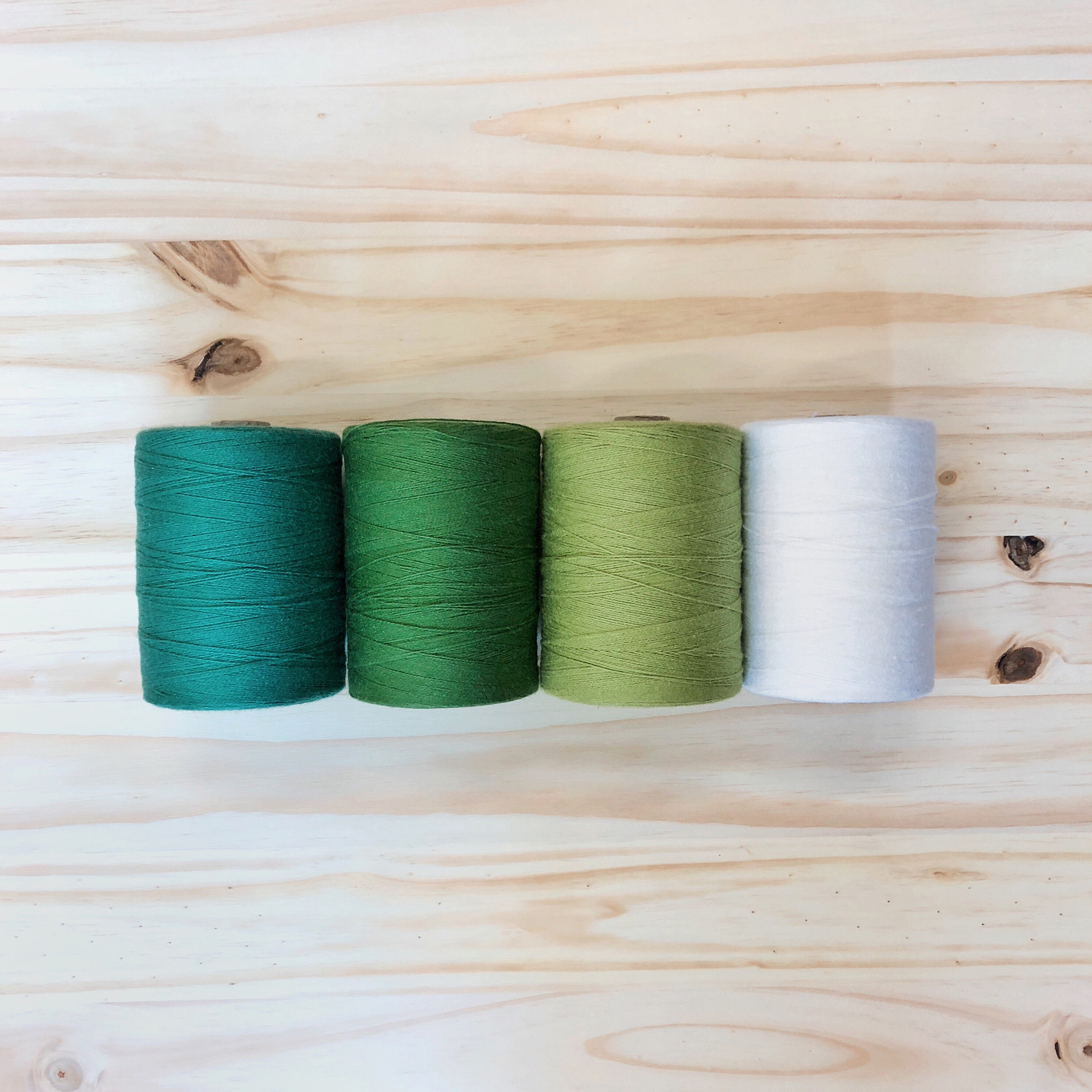 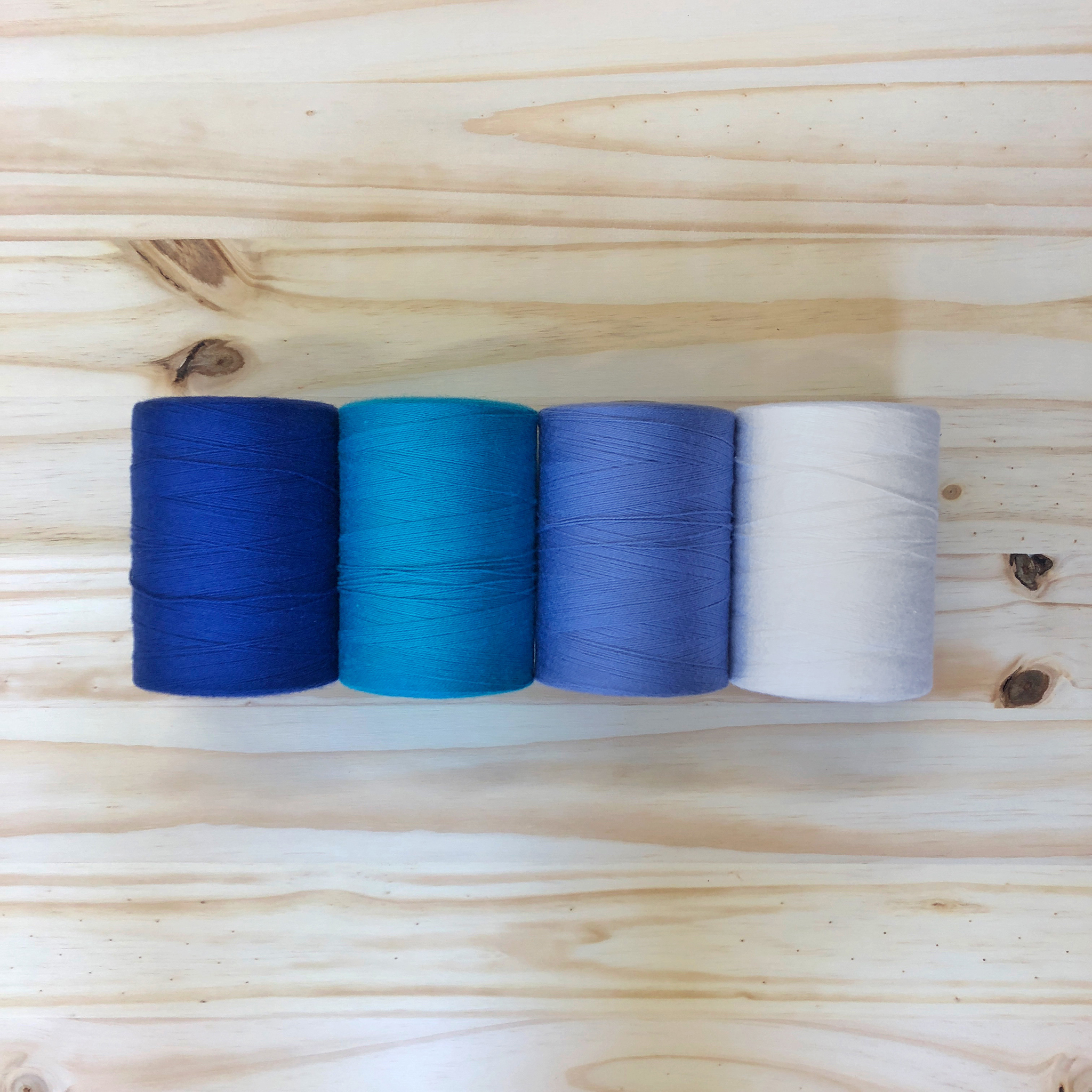 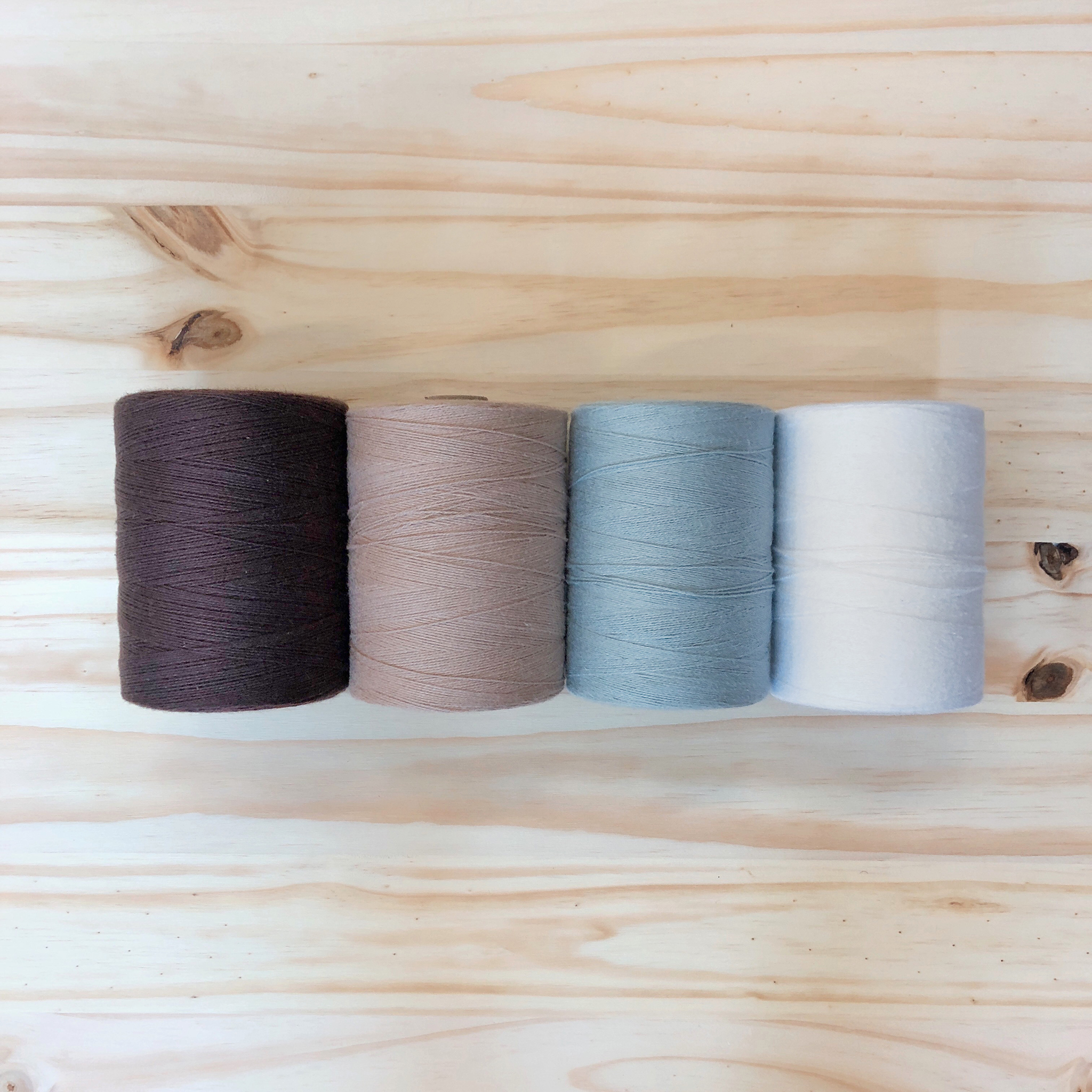 Sarah writes, "For these towels, I wanted to create a pattern with 'structured randomness.' Weaving teachers might not approve of this process description because it takes some "liberties" with the cross, but it is one of my favorite ways to design at the loom.

Using a warping mill or warping board, I wind with all four colors at once. Instead of creating a cross between each thread, I make the cross withfour threads at a time. This is a quick way to create colorful pinstripes while warping. (If you want each warp thread to appear in the exact same order throughout your warp, I suggest using a warping paddle to easily warp four threads at once).

Take your warp chain to the loom and wind on back to front. When it’s time to thread the heddles, grab each bundle of 4 threads one at a time. I randomly select the order of the colors in each bundle of 4 and thread one bundle at a time. Sometimes this results in two warp threads of the same color, from two separate bundles, being threaded next to each other. That’s OK! I like the random look here that occasionally includes doubles of colors.

This is the part where weaving teachers might not approve because it means that there are going to be crossed threads at the back of the loom. I have found this to be just fine as long I stick to threading one bundle of 4 at a time and do not cross threads far across the beam of my loom. As I advance the warp and open the shed, the crossed threads seem to even themselves out and weaving continues happily.

Thread your entire warp this way and then sley 2 ends per dent in a 10-dent reed. If you're making this on a rigid heddle loom with 2 x 10 dent heddles, one warp thread goes into each slot and hole.

These towels offer a great opportunity to see how different weft colors interact and play with a pinstripe warp. I take 4 bobbins or pirns and wind them with each of the 4 colors, being careful to wind different amounts onto each bobbin/pirn.

As I’m weaving I’ll pick up and weave through one bobbin/pirn at a time and then start going with another one, resulting in stripes and blocks of color that blend seamlessly from one towel to the next. The result is a set of towels that are each unique but will play well together beautifully in your kitchen." 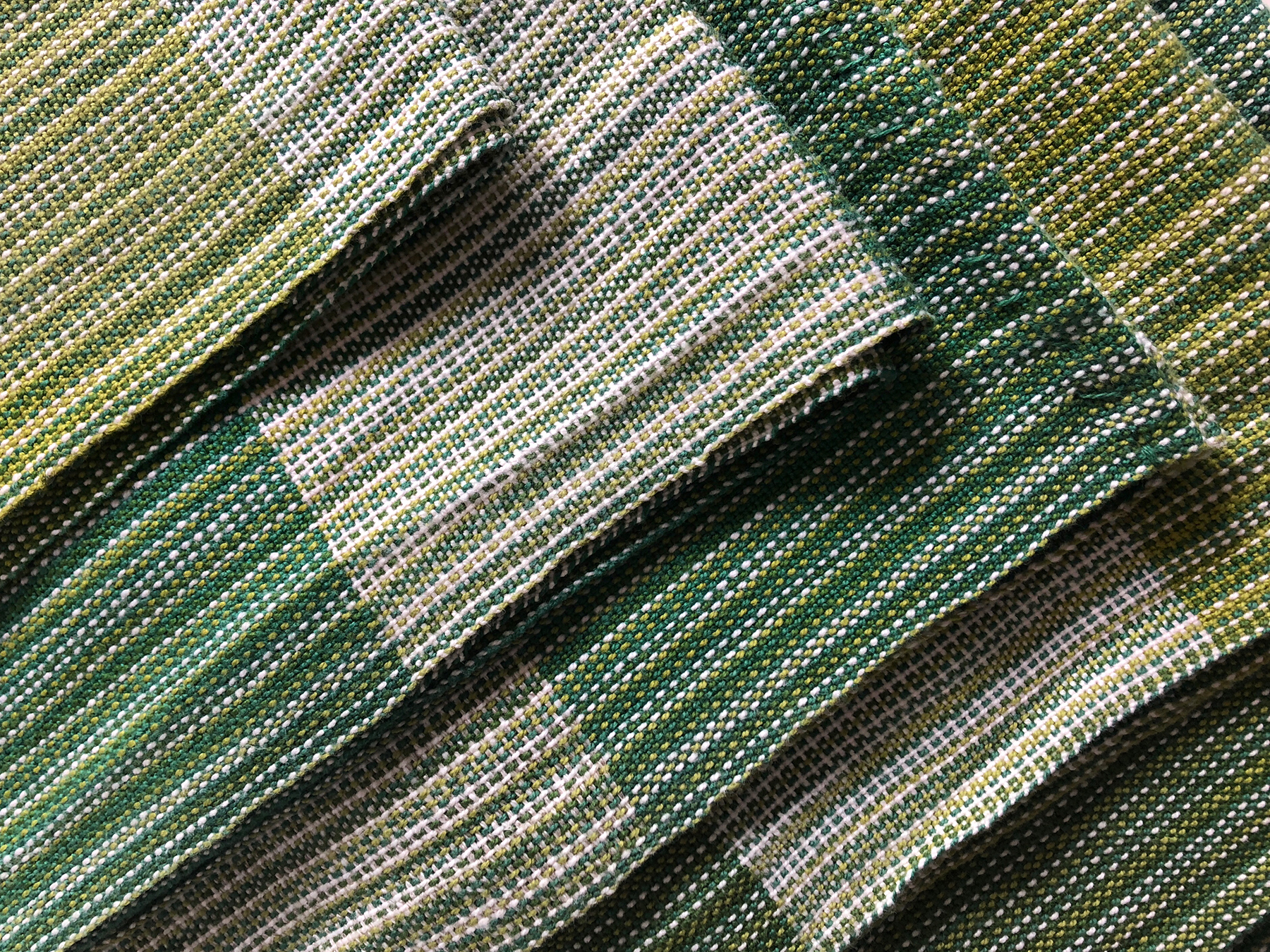 Sarah Resnick is the founder of GIST: Yarn & Fiber, and the co-host of the Weave podcast. She learned how to weave in Toronto in 2009, and was hauling a Craigslist loom up to her apartment two months later...she's never looked back since! Other parts of her fiber journey included selling handwoven baby wraps, helping to launch a sewing factory in Fall River, Massachusetts, and creating Jewish ritual textiles for people celebrating life cycle events. The thread that winds through everything she does is a passion for building systems that directly support farmers, manufacturers, and artists to bring value and beauty into the world. 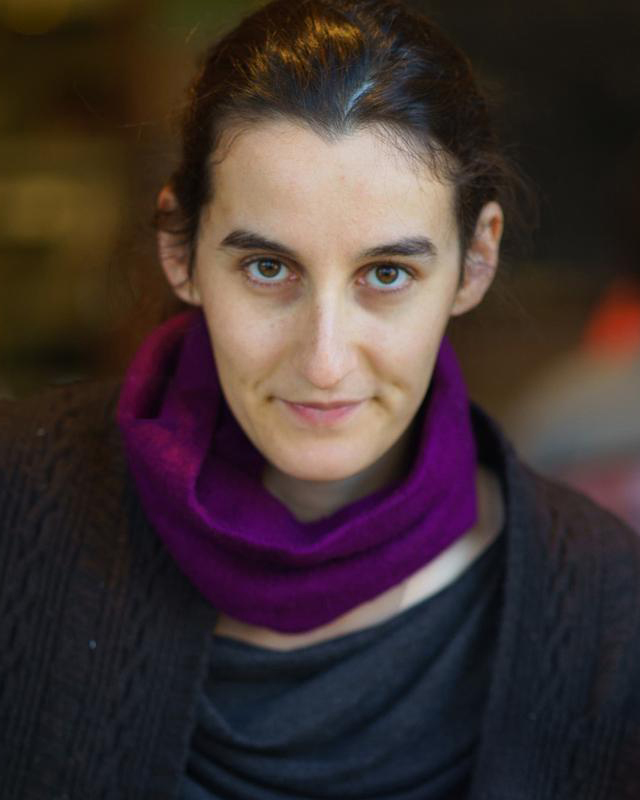